Having heard so many things about this novel, I have been wanting to read it for over a year. So I borrowed it from the library and attempted to dive in. I quickly realized that this was a book I wanted to take my sweet time with and so I returned it and bought my own copy. 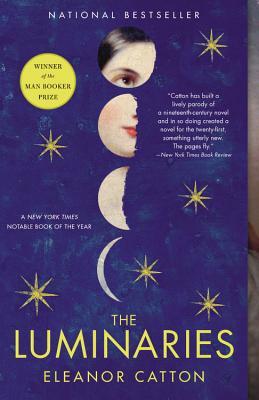 The Luminaries by Eleanor Catton

Walter Moody, a young Scottish lawyer, arrives in a gold mining town in 1866 New Zealand on a stormy night. He walks into a lounge at his hotel and disturbs… something. Inside the room are 12 men of different races and different walks of life discussing a series of mysterious events that occurred on the same day two weeks prior. A man is found dead, a prostitute is found collapsed in the street and a rich man goes missing.  When it is discovered that Moody has a slight connection to the events in question, they take him into their confidence and attempt to figure out what happened.

Where to even begin?  The book was written in the style of a Victorian novel which I really really enjoyed.  It was done so well that I could really have believed it was a Victorian novel.  The structure of the novel was great.  Basically the first 300 something pages were dedicated to that night in the hotel lounge learning of the mysterious events that had taken place two weeks prior.  The whole rest of the novel takes place afterwards.  The book is divided into 12 parts and sections with a different character the focus of each.  At the beginning of each “part” there is a kind of zodiac chart that I’m afraid was lost on me but I did not find it necessary to the story. Though I did notice that the parts of the story “waned” like the moon. (Though I mean to look into it in further depth and maybe come back and amend this review) As we see a little bit more into each character’s life, a little bit of the truth is revealed, piece by piece.  It was wonderfully done in my opinion.  For a book this large – all 832 pages of it- it never dragged.  Every page was necessary to the story.

Catton’s choice of setting was spot on and she managed to bring an 1860’s goldmining town to life. She also focuses attention on the opium trade and the life of Chinese workers in a mining encampment.

I should also point out that I have never read a book with such a well crafted cast of characters.  Before this, I had considered Agatha Christie’s Murder on the Orient Express unique for its large cast of interesting characters.  Until now. There were TWENTY main characters in this book. TWENTY. I have read books with only a handful of characters that the author still manages to make flat.  I guess with an 800 page book, it’s kind of hard not to get to know the characters but Eleanor Catton managed to create 20 well rounded characters and every single one of them was integral to the story.

I guess to sum it up I’d say that there is a reason why this book won the Man Booker Prize.  I thought it was a really remarkable book.  I loved the writing, the structure, the characters, and the plot.  I highly recommend this book and I hope people are not turned off by the size.  I don’t often give 5 stars but this book I gave 5 stars, hearts, or whatever unit of measurement we are using these days.

If you have read this book, please tell me your thoughts.  I’m dying to discuss this one with someone!

2 thoughts on “The Luminaries: my thoughts”

This site uses Akismet to reduce spam. Learn how your comment data is processed.